Home / How to Identify if a Car Transport Review is Legit

How to Identify if a Car Transport Review is Legit 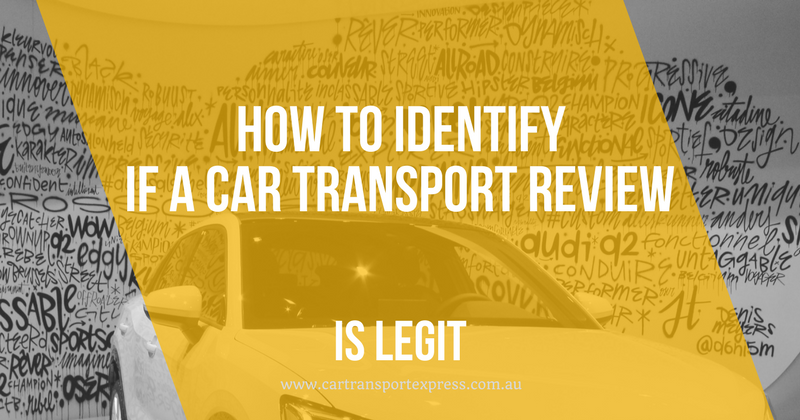 How can you determine that a review acquired by a car transport company is true?

When you look for products or services online, you probably consider reading some of the reviews before you finally settling on one. Mostly, you opt for the ratings that are with five stars than those that only have four and a half. Just so you know that these reviews can be deceptive. Either they were made in exchange for a fee. Similar to the car transport industry.

There are platforms where one can place their reviews for a specific company. They can be in listings, Google reviews, and on the website as well. However, not all are made genuinely. Might as well learn how to identify if a review is a legit one or not.

It is best to look at the specific remarks in a review than just focusing on the star rating. Notice reviews that only display stars? It’s suspicious how lazy the raters did that without even including a short comment to support their rating.

There will always be fake reviews on any platform, this is why it is necessary to check other review sites and not just rely on a single site.

There are review sites where you can check the profile of reviewers and be able to see their other created reviews. In most cases, especially among spammy SEO companies which handle hundreds of listings, they leave fake reviews using a single account. Once you are able to observe this, then might as well avoid it.

Reviews that usually don’t include details such as price, concrete explanation, dates or anything else that makes the review personalised, are fake ones. They are generic reviews that were written utilising a template that contains generic words and exclamation marks. Also, they add keywords that sound unnatural with some even forget to remove the HTML tags.

Most of the accounts created in reviewing sites are for the purpose of leaving fake reviews, and as can be observed on their avatars, they may display non-face or non-person images. Some even steal from Google images and then use them as their account’s avatar.

Reviewers that leave fake reviews are definitely not the smartest people with some of them stealing reviews from other websites word for word and then use them for their reviewing activities.

Legit reviews contain specific information about the performance of a service provider and are moderate in giving praises compared to fake ones which use extreme language.

Many reviews in a brief span of time

Most especially in the cases of new transport service providers, it is suspicious if they have more reviews created by the minute. These reviews must have been published for promotional buzz.

Once you see these mentioned signs, be sceptical at a car transport service provider. It would be best to move on to another company than be trapped by the fake reviews. Comment down below if you have other signs in determining a fake review from the legit ones.